At the ”Fröbelhaus“ an Emergency was Practised for.

On 23 October 2004 a firefighting exercise was carried out at the day-care centre “Fröbelhaus“ in Sonneborn near Gotha in order to test the newly installed evacuation slide. This firefighting exercise proved that evacuation slides made by atlantics do not only rescue persons from danger areas in a fast and reliable way but are also accepted by the youngest users in a most favourably way. 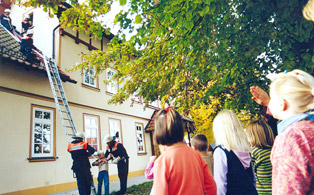 First of all, all people were evacuated from the top floor using the up to then standard escape route by means of ladders. Despite the firefighters’ great efforts, evacuation of the 17 children and 3 adults took more than 45 minutes.

Evacuation Using an Evacuation Slide Made by atlantics

After evacuation by means of ladders the exercise was carried out again. 17 children and 3 adults were evacuated without any assistance by the firefighters in less than a minute from the top floor of the day-care centre via the newly installed slide. This result left the present regional head firefighter, the mayor as well as the head of the building authority deeply impressed.

After Completion of the Exercise all Children Were Treated to a Ride on the Fire Engine.

Thrilled after the successfully completed firefighting exercise, all children could admire the fire engine and afterwards join for a ride.

On 12 August 2009, an evacuation exercise was held also at the kita in Niederdorf / Saxony, jointly with the local firefighting department. This practical test proved to kindergarten staff and firefighters that evacuation by means of a slide is both, safe and, most of all, swift. After the test, it was not only the firemen who were satisfied with the course of the exercise. It was most thrilling and funny for the children who, by the way, had playfully practiced a case of emergency. 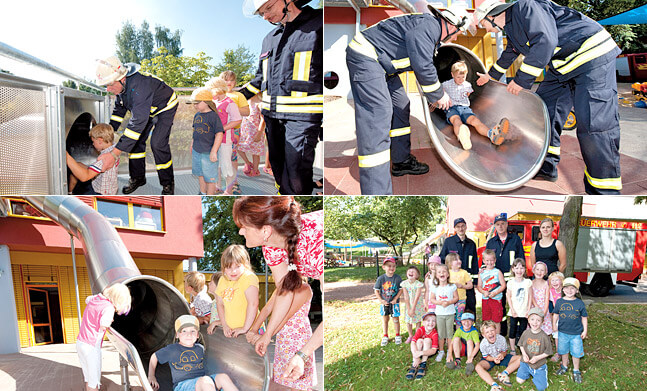